After going through different tools, decided on Capture One Pro. Next step is coming up with a best practice organization that suits my needs, along with backup strategy.

Honestly I feel it is so archaic in 2016 to physically insert SD card to transfer images and manually need to type in keywords. It should be like iPhone and Photos (or Google cloud).You should just take photos in a camera like on iPhone and they should be automatically uploaded into cloud, all other designated devices, sorted based on location and time, and grouped some what like collection and moments, and to share.

Unfortunately our cameras are not as networked as our phones, here is  a process I came up with.

My storage and orgnaization methodology has to accommodate following assumptions.

Need to be prepared for

Got a 4 disk NAS, though using only two for now, the additional two disk for easy future expansion. Using Raid 1, if not has to manually copy the images into two.

Before deleting I calculated the cost of storage. With 4TB drive just around $130, even with 50MB images, 10,000 images is just 500GB. So the idea is to keep al images as backup, but only in external drive, so that they are not getting in a way of daily usage. So kept the images in three folders, (The word Backup is used to indicate that the working copy is somewhere else, and its just backup to be used only for restoration).

Few  of the excellent resources are

1) Lynda.com course from Derrick Story , the good part the content is organized and catalogued really well, so can jump to the section as needed.

2)  Capture One You tube Webinar

3) Blogs from Rockynook and his eBook

After going through many Pro’s and Con’s decided to keep at least all imported images outside of Capture One Catalog, mainly to keep the catalog in SSD and easily copy the catalog between iMac and Macbook if needed.

Did little bit of cleanup in Aperture before coming here. Here are some cleanup step

Cleaning Up Aperture Library Before Import

Step 3: Import Projects Into Capture One

Now is the easy step,  just import catalog and select the Aperture Library. 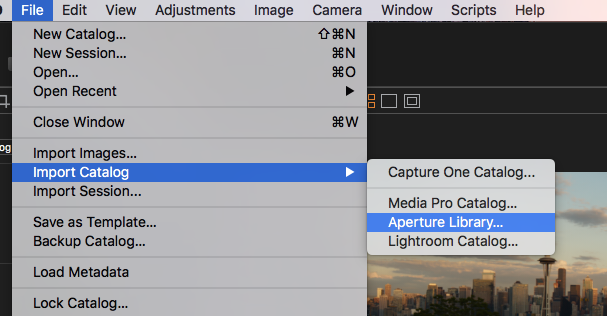 Next step is to do some organization practice with in Capture One.