The Light : Place and Time

Last week I was in Chicago downtown, in front the iconic landmark , “Cloud Gate”. Clear day the Sun just went under the horizon, the western sky is pale blue, the eastern sky is dark. The reflection on “The Bean” is even darker blue. The lights are “on” on many of building. Perfect Blue Hour, the light looked magical.

The Spot For Tripod

I know this kind of light won’t last for long so frantically walked around to find out perfect spot to put the tripod. And also has to make sure I don’t make any setting mistake in the camera. The idea was to capture the sky, “bean” and the building reflection so choose a spot in the side of the bean, which would give a perfect blue sky, reflection of the city on the oval. I would be missing the shape of the bean, I thought I will take the “Oval” instead of “Bean”.

The main subject is the bean, so of course  that should be in there, then the buildings with the lights looked good. I went wide in such way to cover both the bean, buildings and since it is a busy place I went close to avoid people coming in between.

Nothing looked wrong when I saw in the view finder and in LCD. I realized what a mistake it was when I transferred the image from 3″ screen to the 27″ display. I should have been  little bit longer, this 24mm eq. instead  I should little bit tighter to avoid the buildings on the right. It looked good but actually it’s a distraction which I didn’t realize at the time of shooting.

This is due to the composition mistake, since I went too wide, the more of wester brighter sky is included, which meant the camera accounted for that and but the main subject little bit darker. Had I composed right, the metering would be perfect, not much may be 1/3rd to 2/3rd of a stop.

3. Camera Position ( Just off by a body width)

I thought I was in the middle, but I was off by the body width. Should have easily looked for it, as there are lines coming for the middle of the “Bean”. I’m just one square to the right. This also is the result of the extra wide composition, which amplifies every small mistake.

Went with the reflection of the city and the buildings rather then the horizon of the subject. So the final image is titled, and due to the extra wide angle it’s magnified as well and hard to visualize in the LCD.

This is little technical just for Olympus camera, because of moving people I din’t use the Hi-Res mode, I should have used Hi-Res mode, as the people were constantly moving and anyway they will be off in the final image.

Carefully recovered some of the shadows, with out blowing out highlights. Titled the image  and cropped the unwanted parts. This is something that should could be easily out of the camera instead of compensating for exposure, cropping and tilting.

Getting Rid of People

This is something that can’t be avoided, since it is little clod winter night not many people during sunset. Shoot a series of image in succession to make sure there is at least a frame with no people in it. I took 8 images, quickly before the light changes.  With the help of Photoshop layers, removed the people basically by masking the area people are in.

Unfortunately I can’t get rid of the photographer :-), as he is there in all the frames. Adjusting for the Web

Though the above image looks good, it is missing what I saw. The ground was not that dark, I can see lot more details not ground and also there is clear difference between the “Bean” and the sky behind it. Adjusting the tone brought some of it back. This image will look much brighter and unnatural  when viewed on the monitor, but looks good on print. Though this image doesn’t look like that, print looks very close to what I saw.

I personally think the B&W looks better, looking for perfect paper to print it, to get a silvery glow. 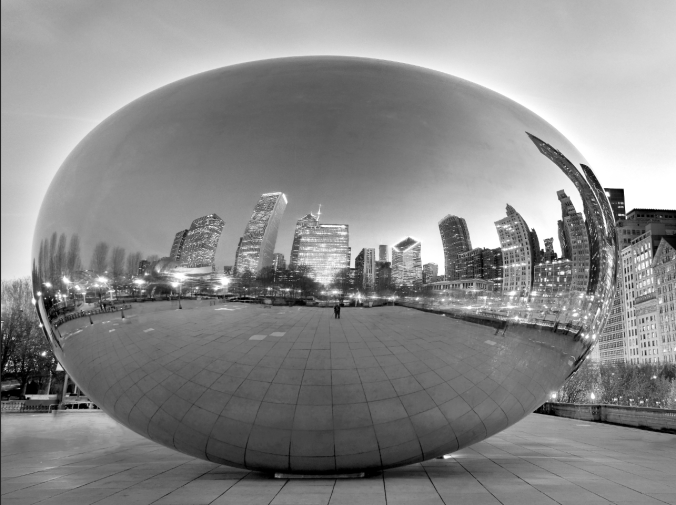 Though the print looks extremely good, I felt like I missed a great photo opportunity for a large print.

It’s all about light and composition. Though I had perfect light, composed the shot with the things I needed more than what should be there, all the small mistakes get amplified when the composition is off. For me this meant instead of 30″ x 40″, or even a 60″ x 40″ print on the wall I have settle for a max size of 12″ x 16″ as I cropped down nearly 50% of the original  area.

Anyone who lived in Chicago knows, it’s not easy to get a clear early winter day in Chicago. Since the sun started setting later in the day after 5:30, most of the buildings lights are off during blue hour. So wish me better luck next year!