Just received the O-M1 Mark II. Thanks to return policy and the many good reviews, it’s the first camera I am buying without trying it physically.

Packaged really well. Fells like something expensive is inside it. Doesn’t feel that heavy though. Felt like a very well made camera, no part of it feels cheap.  Little bit bigger than previous camera, but way much smaller than D810 and the likes. 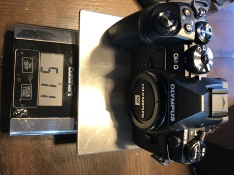 Almost the size of small APS-C DSLR, The size is bigger mainly due to the handgrip but feels very comfortable in hand. All the controls are well placed. Wish the power button is on the right hand side, would be little tough to do a one hand operation. Though my scale shows it is heavier by 4 oz than my previous camera, I didn’t feel the difference when the lens is attached.

This is when I notice what a “Pro” part of the camera feels like. Everything is snappier,
just wants you to keep shooting. Every part of the camera is well refined, all the knobs rotate easily and is more responsive. Very silent even in normal operation.

I had some expectation based on reviews but the responsiveness easily blew past my expectations.

After using it for little bit, it almost lets you forget that view finder is electronic. It almost feels natural, much better than the Sony A7 Mark ii cameras.

Though I have used Olympus before, the controls are lot different with E-M1 Mk ii, but in a better way. I would say very intuitive. I can do all the basic operation , Aperture, Shutter Speed, Exposure Compensation, ISO, White Balance , Focus Point Selection, and then going back to all Auto mode with out looking at the screen or taking the eye of the view finder.  This is just with two wheels and one lever. There are five other buttons has to figure what they do, for me the more physical button there is , the better it is.

Unless you use this camera there is no way to understand why this is better camera in handling. Is it worth the price, at least for me it feels like it.

Was very hesitant to buy this instead of D810, which was almost the same price and did’t have to wait. I made the decision based trying out Pen-F just on image quality and lens size. Had I used E-M1 Mark II, I would not have given much thought to D810 and would have straight away gone with it.

Very glad I decided to buy the E-M1 Mark II, this is much better than all the camera I have tried so far.  Review of Camera from a local store.  Most of the criticism of the price and sensor size is from people who have never tried it, I am sure they will change their mind after using it.

Hang on for the detailed review, comparison with the E-M5 and possibly full frame and APS-C camera.